With the inauguration of the Bundelkhand expressway, UP got its sixth such operational artery. The state government claims that UP will have 12 expressways spanning over 3,000 km, more than any other state. Of the 12, six are operational, while work is under way on others. Prime Minister Narendra Modi inaugurated the 296 km long expressway in Jalaun on July 16. Running between Chitrakoot and Etawah, it was completed eight months ahead of schedule—a result of continual monitoring by the CM himself as well as top officers of Uttar Pradesh Expressways Industrial Development Authority (UPEIDA), say government officials. The access-controlled (entry and exit are regulated) network is being developed by UPEIDA, the agency set up to steer the expressway expansion programme in 2007.

When the BJP government came to power in 2017, UP had only two major functional expressways, the Yamuna Expressway, connecting Agra to the National Capital Region, and the Agra-Lucknow Expressway. Of the 12 expressways now, the Yogi Adityanath government is focusing more on the Purvanchal Expressway, the Bundelkhand Expressway and the Ganga Expressway, all UPEIDA projects. PM Narendra Modi inaugurates the project in July in the presence of UP CM Yogi Adityanath; (PTI Photo)

The 341-km long Purvanchal Expressway, inaugurated by PM Modi in November 2021, is one of the biggest completed infrastructure projects of the Uttar Pradesh government. The project was announced by then chief minister Akhilesh Yadav as the Lucknow-Azamgarh-Ballia Expressway in May 2015. Later, its route was changed to Lucknow-Azamgarh-Ghazipur by the BJP government. “The CM himself belongs to Purvanchal, he focused on its development as it’s a new lifeline for business in eastern UP,” says an official in Yogi’s office. It cost an estimated Rs 22,496 crore. The six-lane expressway starts from Chandsarai village in Lucknow district on the Lucknow-Sultanpur road and ends at Haidaria village on National Highway 31 in Ghazipur district. Travel time from Lucknow to Ghazipur has now halved: from seven hours to three-and-a-half hours. The districts of eastern UP—especially Lucknow, Barabanki, Amethi, Ayodhya, Sultanpur, Ambedkar Nagar, Azamgarh, Mau and Ghazipur—will be the main beneficiaries. In the same area, the under-construction Gorakhpur-link expressway will connect Jaitpur village in Gorakhpur with Salarpur village on the Purvanchal Expressway in Azamgarh district, reducing travel time between Gor­akhpur and Lucknow to three hours from five.

The Bundelkhand Expressway will connect Chitrakoot in the Bundelkhand region with the Agra-Lucknow Expressway near Etawah. It starts near Bharatkoop at the Jhansi-Prayagraj National Highway 35 in Chitrakoot district. The project has been completed in 28 months—eight months ahead of its deadline, claims the government. The four-lane expressway, which can be expanded to six lanes, will pass through seven districts—Chitrakoot, Banda, Mahoba, Hamirpur, Jalaun, Auraiya and Etawah. Officials say the total cost of the project is estimated to be about Rs 15,000 crore. Significantly, the expressway will link the Bundelkhand area with New Delhi through the Agra-Lucknow Expressway and Yamuna Expressway. Chitrakoot is now just 6.5 hours away from the national capital. Earlier, it used to take 9-10 hours. For parched Bundelkhand, the project can be an economic blessing too. The central government’s Uttar Pradesh Defence Industrial Corri­dor has a node in Chitrakoot; the oth­­­ers are in Agra, Aligarh, Jhansi, Luc­know and Kanpur. CM Yogi Adityanath says, “The Bundelkhand Exp­­ressway will add a new dimens­ion to the economy of the region and the rest of Uttar Pradesh. This vikas ka expressway will ensure seamless connectivity and open up new possibilities for the people of Bundelkhand.” With Chitrakoot within reach of a doable longish drive, a boost to tourism is expected. Anticipating this, the state tourism department was asked to prepare detailed plans, and has come up with a package that sho­wcases caves, forts, eco-tourism and adventure sports. Sunil Kumar, prof­essor, Institute of Tourism and Hotel Management at Bundelkhand University, says, “Bundelkhand is a bit unexplored in terms of tourism but it includes many heritage sites in Mah­oba, Chitrakoot, Orcha and other places.”

After its completion, the 594 km Ganga Expressway could rightfully be called an ‘artery’. The proposed expressway will start from NH 334 near Bijauli village in Meerut district and terminate on NH 19, near Judapur Dandu village in Prayagraj district. Once complete, it would be the longest highway in the state. The Uttar Pradesh cabinet met at Prayagraj, venue of the Kumbh Mela, and gave the go ahead for the expressway in January 2019. The project aims to construct an access-controlled eight-lane expressway running along the Ganga. It will cover 12 districts—Meerut, Hapur, Bulandshahr, Amroha, Sambhal, Badaun, Shahjahanpur, Hardoi, Unnao, Rae Bareilly, Pratapgarh and Prayagraj—and thus connect east and west UP. The foundation stone was laid by PM Modi in Shahjahanpur on December 18, 2021. The expressway will also link the northern districts in western UP with Meerut, which is linked to NCR through the Delhi-Meerut Expressway. The project is expected to be complete by 2025.

Other notable road projects of Uttar Pradesh are within the remit of the National Highways Authority of India (NHAI). Among these, the Lucknow-Kanpur expressway project is considered important. According to N.N. Giri, project director, NHAI (Lucknow zone), “Construction will start in October 2022 and will take two and a half years to complete. Travel time from Lucknow to Kanpur will be reduced to 45 minutes, from one and a half hours.”

According to Awanish Awasthi, addit­ional chief secretary, home, and CEO of UPIEDA, “Expressways are the backbone of infrastructure and tourism development. The chief minister wanted us to connect districts in Purvanchal and Bundelkhand, which are considered backward, with the other parts of UP. We have done this through the Purvanchal and Bundelkhand expressways. Our next focus is the Ganga Expressway, through which we will connect east and west UP.”

Not just construction, the state government is focusing on better monitoring of roads too. The state’s public works department (PWD) has finalised a plan for digitised mapping and maintenance of roads. The state PWD minister Jitin Prasada wants to use technology for effi­cient monitoring, which would aid in the maintenance, of the state’s vast road network of around 300,000 km. “We are focusing on GIS (global information system) mapping of all roads. Another step will be the digitisation of departmental records and making the data available through the Nigrani app. It will allow users to access details of all roads,” says Prasada.

However, not everyone is rooting for the expressway drive. Former CM and Samajwadi Party chief Akhilesh Yadav accused the government of rushing in to inaugurate “half-complete” expressways. “The hurried inauguration of the half-complete Bundelkhand Expressway shows that its design is chalaau (make-do),” he said in a statement. “Even with the proximity of the defence corridor, the BJP government could not construct an airstrip like the one made on the Agra-Lucknow Expressway during the Samajwadi Party government,” he added. 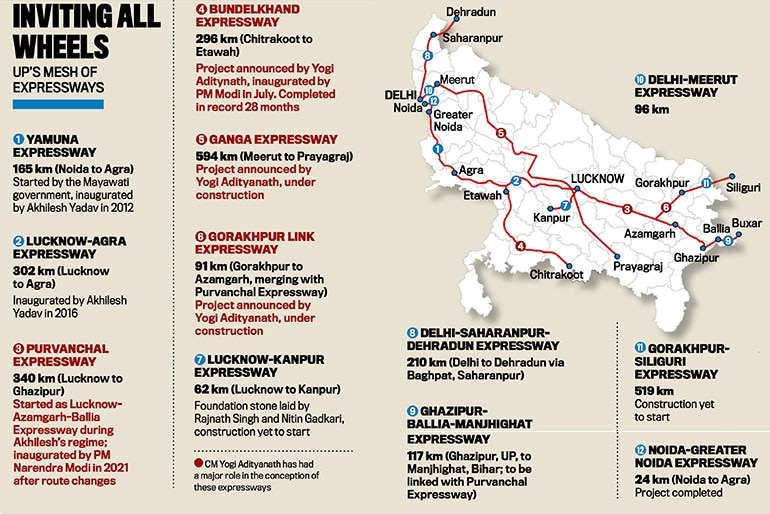