Half a century before Thomas Moore’s Oriental romance, Lalla Rookh (1817), extolled the beauty of Kashmir as a paradise on earth to the West, its handicraft, especially textiles and shawls, had conquered European capitals. Everyone was bewitched by Pashmina and Shahtoosh shawls—Napoleon gave them to empress Josephine and Queen Victoria was a lifelong devotee. Light and soft, warm and woven in exquisite patterns and designs, Kashmiri shawls became synonymous with the luxury and comfort of the finest wool: ‘Cashmere’. Shawls were the premium articles from Kashmir, but intricately carved walnut wood, willow wicker craft and carpets were also prized.

Spread along the banks of the Jhelum, Srinagar has long been home to Kashmir’s top artisans who operated out of karkhanas (workshops) in residential houses along the narrow lanes of the old city. Unfortunately, descendants of those artisans who left an indelible mark on world fashion are now being forced to give up their traditional craft and shift to ordinary jobs, for all they have to show for generations of devoted work is penury.

The art of weaving Pashmina is intricate and time-consuming, requiring skilled artisans who work on thread as thin as 10-16 microns— thinner than human hair

In Eidgah Narwara in Srinagar, artisans from some 400 karkhanas once trained and worked in each segment of Kashmiri craft, ranging from weaving to designing of shawls. From a naqqash (designer) to an artisan, the area was a hive of talent. Till a few decades back, residents would have their children follow in their ancestors’ footsteps, as wages were decent. Ahtisham Hussain joined a handloom workshop after quitting school in 1989. Initially, he would weave shawls on a handloom out of the delicate and soft yarn of the world’s finest and most expensive wool, Shahtoosh. Later, after trade in Shahtoosh was banned, he used the Pashmina wool. The art of weaving Shahtoosh or Pashmina is intricate and time-con­su­ming, requiring skilled artisans who have to work on thread as thin as 10 microns to 16 microns—much thinner than a strand of human hair (70 microns). Procured from the underfur of the high-altitude Chiru antelope found in the Tib­e­tan plateau, Shahtoosh was always exorbitantly priced, something only the plutocracy could afford.

But Chirus are endangered animals and Shahtoosh trade was banned globally in 1975 under the Convention on International Trade in Endangered Species (CITES), to which India is a signatory. The antelope is also listed in Schedule I of India’s Wildlife (Protection) Act. An initially reluctant J&K government led by Farooq Abdullah extended the ban in 2000, hitting the livelihood of about 15,000 people. In 2017, a parliamentary panel led by Congress MP Renuka Chowdhury recommended lifting the ban, suggesting instead the “conservation and breeding of chiru goats”, in order to preserve the livelihood of Shahtoosh weavers. 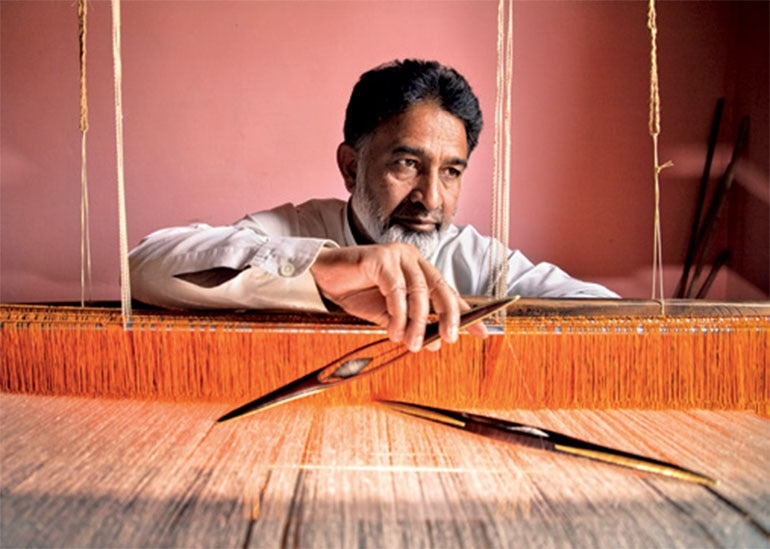 Rauf Ahmad Qureshi works on a loom at his house in Srinagar; (Photo: Yasir Iqbal)

Pashmina wool is sourced from the Changthang goats in Ladakh. From raw wool to a finished shawl is a process as labour-intensive as it’s skilful: involving dehairing, scouring, bleaching, spinning, weaving, dyeing, finishing, cleaning and embroidery. An original Pashmina fetches thousands of dollars in the international market.

Yet, deplorably, the very men who toil unceasingly to create these achingly beautiful objects are underpaid, caught in a cycle of poverty and increasingly driven to leave the profession. As a result, crafts honed over centuries are inching towards extinction. Hussain, who is 52-years-old and a father of three, regrets taking up the craft. “My children would weep when they left for school because I could not afford a packet of biscuits or snacks for them,” he says. Hussain has now quit the trade and signed up as a salesman at a sanitaryware shop. As he runs his fingers through a salt-and-pepper beard, he seems a content man—he now earns three times as much as he did making shawls.

According to Hussain, his craft as a weaver brought him only Rs 300, while unskilled labourers earn above Rs 700 a day and get social security benefits. “As a weaverI could not afford my children’s tuition fees. Others make money out of our hard work, while we become poorer by the day.” Faced with an irremediable situation, artisans avoid passing their skills to their offspring. Many, like Hussain, won’t even let their children set eyes on the looms that once sustained their families.

An official document cites that production of handmade carpets, kani shawls, Khatamband woodwork, namda rugs, papier mache objects and walnut wood carving is facing an acute manpower crunch. However, since Kashmir handicrafts is an unorganised sector, accurate data about artisans quitting the sector is hard to come by. Prof Imtiyaz-ul-Haq, head of the economics department at Kashmir University, explains that Kashmir is a labour deficient economy and almost 800,000 migrant workers come here for work annually. Consequently, labour wages have shot up, resulting in low-paid skilled artisans quitting their trades and taking up menial jobs, such as construction labour. This has resulted in a decline in production and export of Kashmiri handicrafts.

For instance, nonagenarian Ghulam Mohammad and his four sons did walnut carving, but not a single member of the next generation have taken up the job. Instead, they have moved to the West Asia to work and are now prompting their fathers to quit the craft. “Our children were not willing to allow us to carry on with our karkhana,” says Zahoor Ahmad, citing the reason for quitting the trade. Besides low wages, Hussain attributes the steady attenuation to a ‘slow poisoning’—eye problems and orthopaedic issues are common afflictions among weavers and embroiderers. “This trade sucks the blood of craftsmen, but all we get is exploitation,” he says.

Foreign exports of Kashmiri handicrafts have fallen steeply over the past decade. Artisans attribute it to machine-made products sold as ‘genuine’ Kashmir products that ultimately devalue the brand

While Europe is still enamoured of Kashmiri handicraft, it also has a large market in West Asia and China. Over 900,000 people are associated with the trade, including 280,000 artisans registered with the government’s han­­di­­crafts and handlooms department—66,000 are weavers, the rest are engaged in walnut wood carving, papier mache craft, crewel embroidery and other trades. But here, too, there is approaching gloom—annual trade has fallen steeply, with foreign exports dwindling in the past decade. From nearly Rs 1,700 crore in 2013, annual exports have dipped to Rs 563 crore in 2021. While officials blame the pandemic for the precipitous drop, exporters and artisans point to a more insidious foe: machine-made pro­d­ucts sold as ‘genuine’ Kashmir handicrafts. Thus, an ersatz ‘Pashmina shawl’ made on a machine and priced at Rs 3,000 is sold to unsuspecting customers, devaluing the Pashmina brand. According to businessmen, overseas clients now test the pro­duct in laboratories for genuineness. Mill-made products have also put many craftsmen—from women who would convert fibres into fine yarn on a charkha (spinning wheel) to weavers—out of jobs.

Rauf Ahmad Qureshi, founder, Kashmir Pashmina Karigar Union, who still uses women workers for producing handmade shawls, says mach­ines have ruined their trade. “One machine spindle spins 200 grams of Pashmina fibre a day or more, with 10-20 per cent nylon. Its yarn is cheap, costing Rs 8,000 to Rs 20,000 a kg,” he says. But the thread/ yarn produced from the wool on a traditional charkha, says Qureshi, is 100 per cent pure and priced at Rs 40,000-50,000 a kg. “The yarn produced on spinners is woven on power looms with a capacity to make 100 shawls a day. It’s sold as ‘Kashmir Pashmina’, threatening our legacy. They should have a machine-made label to avoid cheating clients,” he says. The union has been asking authorities to shut illegal machines and to help promote national and international awareness of the GI (Geographical Indication) tag that was secured for Pashmina products in 2008.

Since a GI tag identifies a unique product of a region, its enforcement is expected to weed out counterfeits. The products will be tested in a laboratory and genuine items will be labelled with a Radio Frequency Identification (RFID) tag. Seven Kashmir handicrafts have secured a GI, including Pashmina, walnut wood carving, papier mache craft, sozni craft, kani shawl, carpets and Khatamband.

Rauf Wadera, consultant with Tahafuzz, an organisation representing Kashmiri artisans, says the recognition has enabled greater entry into global markets. But now, the key concern should be providing artisans with social and economic security. “A separate labour protection policy should be there to ensure minimum wages for artisans,” he says. “A benevolent fund for contingency needs, health insurance, provision for children’s education and supply of raw materials at a fair price are also needed.”

President of the Kashmir Chamber of Commerce and Industry (KCCI) Sheikh Ashiq was amongst Kashmiri business leaders who met Prime Minister Narendra Modi in New Delhi on April 5. He submitted a memorandum seeking exemption of taxes on all handicraft products. His proposals include setting up special production centres to push the industry towards being an organised sector and thus improve the lot of artisans.

Tariq Ahmad Zargar, director, handicrafts and handlooms Kashmir, says artisans are benefitting from the Karkhandar scheme, launched in 2021, that aims to revive languishing crafts through improving artisans’ skills and inculcating a spirit of entrepreneurship in them. The government has incentivised the programme by offering Rs 2,000 a month to each trainee artisan. Later, each qualified artisan is paid Rs 50,000 in two instalments. “We are working on branding, packaging and introduction of new designs for international market requirements. Besides, we are concentrating on access to new markets, especially the US, which remains untapped,” says Zargar.

Hopefully, the scheme would stop some of the world’s finest craftsmen from being forced to relinquish their trade due to sheer want.