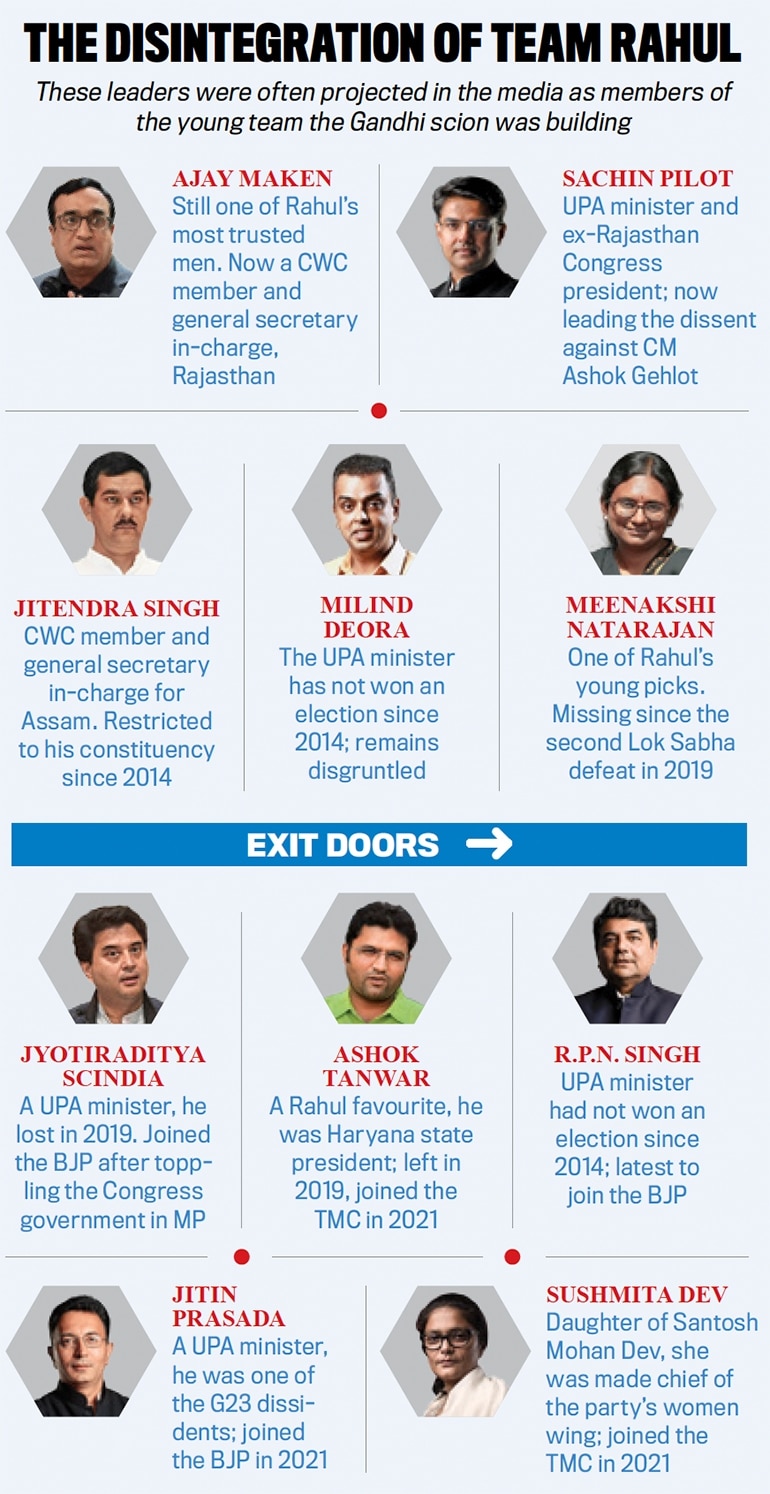 The comment was later withheld at the leader’s request, but it was one of the first indicators of disgruntlement among the younger lot who had come to the fore after Rahul joined politics in 2004. While the Gandhi scion has ‘survived’—even helmed the party at one point despite the multiple electoral debacles since that disastrous summer of 2014—several leaders of his generation, including the minister who had made the aforementioned comment, have deserted Rahul and the party.

On January 25, R.P.N Singh became only the latest member of ‘Team Rahul’ to desert the Congress ship. This ambitious coterie took shape in July 2003 at a three-day chintan shivir (brainstorming session) of the Congress in Shimla. At the shivir, a Congress general secretary known for his proximity to the Gandhi family, had gone around asking the participants to name young Congressmen who could be groomed as future leaders. On the final day of the session, on July 9, a few names were scribbled on a piece of paper—Sachin Pilot, Jyotiraditya Scindia, Jitin Prasada and R.P.N. Singh. They were expected to work closely with Rahul, and all of them, besides two others—Ajay Maken and Manish Tewari—were given tickets to contest the Lok Sabha election in 2004 in which Rahul too made his debut. Five years later, two more names—Jitendra Singh and Milind Deora—were added to the list made up mostly of scions of political dynasties.

Nearly two decades later, his team—all of whom have served as Union min­isters—has disintegrated. Three of them—Scindia, Prasada and RPN—have joined the BJP. Pilot and Deora have expressed discontent on many occasions. Tewari, one of the Group of 23 leaders who had written a letter to Congress president Sonia Gandhi in August 2020 seeking an overhaul of the party organisation and leadership, has not been given any significant assignment despite being a senior leader in the Lok Sabha. Only Maken and Jitendra Singh have shown unwavering commitment to Rahul though they too have not won a single election since 2014.

Apart from the original team, down the years, Rahul also backed several other young men and women, giving them significant roles in the party. A 38-year-old Ashok Tanwar, who was also a former Youth Congress president, was made president of the Haryana Congress. Sushmita Dev, daughter of Gandhi family loyalist and former Union minister Santosh Mohan Dev, was made head of the All India Mahila Congress. Both joined the Trinamool Congress (TMC) last year. Though none of the breakaway leaders has publicly uttered a word against Rahul, sources attribute their disillusionment to the latter’s leadership style and the failure of the party to come up with a narrative that can attract voters.

Privately, many complain that the Congress leader can be ‘flighty’, periodically changing his advisors and promoting a new coterie while others fall off the radar. Also, once he turns his back on someone, it becomes very difficult to get an audience again. After losing patience, and trust, with many, Rahul now doesn’t rely on the counsel of any particular leader and has adopted what one leader describes as a horses-for-courses approach. “This is making his decisions seem more random. One day he is consulting Jairam Ramesh, the next K.C. Venugopal. A party decision can even be made after a casual conversation with someone from another party, like CPI(M) general secretary Sitaram Yechury. This is making his own leaders restless,” says a CWC (Congress Working Committee) member.

Rahul’s supporters dismiss such criticism and claim “the deserters” moved because they couldn’t even protect their own constituencies. “The party continued to give tickets and whatever else they wanted to these leaders. Rahul and Priyanka campaigned for some of them too. But they spent little time on party work in their constituencies, so they kept losing. How can Rahul be blamed for this?” asks a Lok Sabha MP from the party. While Scindia and Sushmita won the 2014 Lok Sabha poll, they lost in 2019. Prasada, Tanwar and Jitendra Singh have been losing since 2014. Several Congress leaders even claim that the perception that these leaders were close to Rahul was a “carefully cultivated PR exercise”. They were seen moving around with him in Parliament around the same time he became a Lok Sabha member for the first time, and he interacted more with them because they were his contemporaries. “As a leader, Rahul is very affectionate towards his colleagues. Many among us misunderstand it as a passport to get the positions we aspire for. But when it comes to party and organisation, he keeps the larger interest in mind and doesn’t practise favouritism. Then the so-called friends get upset and blame him for their inability to deliver,” says Lok Sabha MP and Congress CWC member Manickam Tagore.

Besides the shrinking electoral capital, what troubled these former friends was the gradual sidelining within the party organisation. The party’s de facto leader apparently also did not intervene to protect their “valid concerns”. In 2018, Rahul chose veteran Kamal Nath over Scindia as the chief ministerial choice for Madhya Pradesh. In Uttar Pradesh, Prasada sought to position himself as a Brahmin leader. But when Priyanka Gandhi became general secretary in-charge of UP, he found he had no role in her scheme of things. Former royal and Kurmi leader R.P.N. Singh was involved in a turf war with state Congress president Ajay Kumar Lallu whose assembly constituency Tamkuhi Raj falls within Kushi Nagar, the Lok Sabha constituency RPN contests from. Lallu, incidentally, is a close confidant of Priyanka.

Tanwar was upset because he was removed as Haryana Congress president in 2019. Rahul also did little to protect him against state satraps such as former chief minister Bhupinder Singh Hooda, who had allegedly made things difficult for Tanwar. But, as a Congress MP from Haryana asks, “Why does he blame others when he could not win his own seat twice?”

Many within the party admit that Sushmita Dev’s departure was necessitated by the changing sociopolitical scenario in Assam’s Barak Valley where her constituency, Silchar, falls. The Barak Valley is dominated by Bangla-speaking Hindus and Muslim. Most of the immigrant Hindus support the Citizenship (Amendment) Act, but the Congress is against it. Though Sushmita took a separate stand from the Congress on the issue, this was not enough to convince the Hindu vote bank. Weighing her options, she chose to join the TMC, which is wooing voters as a party for the Bangla-speaking population in Assam, irrespective of their religion.

Congress insiders say unlike Scindia, who was instrumental in dethroning the Congress government in MP, the other turncoats will not cause any significant damage to the party. Scindia and Sushmita have taken the Rajya Sabha route to Parliament while Prasada entered the upper house of the UP legislature. RPN and Tanwar are still undecided on their future course of action. But the desertions have caused a big dent in the political brand equity of Rahul Gandhi as these leaders were perceived to be close to him.

The redemption will now dep­end on his latest gamble—selecting Charanjit Singh Channi as the Congress CM candidate for Punjab and ignoring the mercurial Navjot Singh Sidhu. Just months ago, Sidhu was the chosen soldier of Rahul and Priyanka in their plan to neutralise former chief minister Amarinder Singh. The results of the Punjab assembly election will determine whether this new move was a masterstroke or another dud by the perennial prince of the party. n